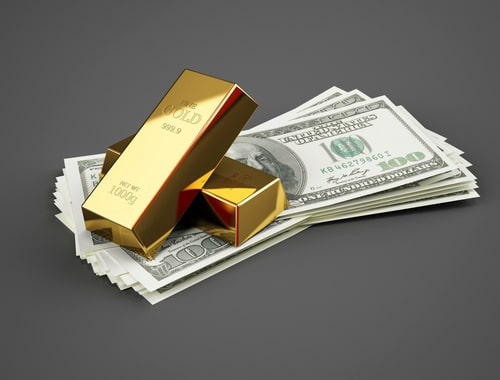 (Kitco News) Gold and the U.S. dollar are well known for their inverse correlation. But will 2022 be the year of gold or the U.S. dollar? Ned Davis Research’s (NDR) chief global investment strategist Tim Hayes weighs in.

With the Federal Reserve looking at a more aggressive tapering schedule next year and potentially two rate hikes, the U.S. dollar index has been holding up quite well at the 96 level, which has been weighing on gold.

But will the inflation narrative change the outlook for gold next year?

“The dollar made a high right after the COVID-19 crisis in March. And on the question of which one is more likely to make a new high — gold or the dollar — I’d say gold. I’m currently neutral on the dollar, which sort of implies that it stays in its trading range. But I’m bullish on gold,” Hayes told Kitco News in an interview.

Contrary to the U.S. dollar, gold has a solid setup going into next year and could reach new all-time highs after consolidating since its August 2020 record highs, Hayes noted. “Gold is likely to hit new record highs as long as this environment remains. And that implies that this is about as good as it gets for the U.S. dollar,” he said.

On top of that, the U.S. dollar will face more persistent competition from the euro in 2022. The European Central Bank (ECB) is likely to remain accommodative while the euro area economy recovers after the latest COVID-19 variant. “The euro has the most weight in the dollar index, and Europe is in a better position. The euro could start to move higher against the dollar,” Hayes stated.

And the sentiment analysis of the U.S. dollar and gold does point to gold’s improved performance potential.

NDR’s chief global investment strategist would not be surprised to see the dollar in a downtrend as the rest world recovers relative to the U.S. and the Fed ends up being more steady in its tapering approach.

Gold’s overall trend will be working in its favor next year, with investors witnessing higher lows on a long-term basis.

“The trend has been making higher lows in gold. And if inflation does really start to show up more globally and turns out to be stickier, that could really support a longer-term move up in gold,” Hayes explained. “Gold has been consolidating since hitting new record highs in August 2020. And if you look at the lows since 2018, they have been higher lows. That points to an uptrend.”

According to Hayes, gold will benefit from negative real rates, which are not going away even with the Fed wrapping up tapering and raising rates twice next year.

A stronger U.S. dollar in the face of rate hikes has been one of the obstacles holding gold back this year. “We need to be open to the idea that maybe we won’t see inflation come down as quickly. Inflation is transitory, but it is going to stay around longer due to shortages. The main drivers for gold next year will be negative real interest rates, inflation expectations, gold’s uptrend, and a weaker U.S. dollar,” Hayes said.

As the Fed starts to raise rates, one thing to watch out for is increased volatility in the U.S. equities space. Investors are already beginning to see this, he added.

“The biggest correction the market has this year was 5%. We might be at risk of a bigger correction next year. Volatility is something that we just haven’t seen for a while,” Hayes said. “But it doesn’t have to be a bad year. I would say hold stocks over bonds. Maybe hold a little more cash in a rising rate environment. Gold will continue to do well.”