People tend to have a very narrow definition of what constitutes a robot.

Metal arms, servo motors, and visual sensors do not a robot make. If you take even a cursory examination of the history of robotics, you’ll find plenty of examples of robots invented before there was electricity that are just as much autonomous machines as the high-tech innovations of today.

While pursuing the internet, you may have come across several terms being used in all manner of incorrect ways. This guide will give you everything you need to comprehend the jargon being thrown around by academics and self-styled thought-leaders.

Who coined the term ‘robot’?

The word ‘Robot’ was first used to describe artificial automata by writer Karel Čapek in his 1920 play Rossum’s Universal Robots.

Actuator: a motor that reads programming signals and translates them into mechanical movement.

Aerobot: a type of aerial robot that is set apart by its capacity for independent flight.

Android: a humanoid robot designed to resemble an adult human male. The ‘andro’ prefix is in reference to the assigned masculine gender of the machine.

Articulated manipulator: a robot arm that is divided into independent segments that are controlled by one or more joints.

Automaton: the process by which human labor is replaced by autonomous machines.

Autonomous vehicle: any vehicle that can operate without direct human control, usually through a built-in autopilot system.

Axis/degree of freedom: this term refers to how a robot arm or body can maneuver. This corresponds to the number of joints in a particular machine. While joints to degrees of freedom is not a 1:1 ratio, more joints is the most straightforward way to achieve a greater degree of freedom for a robot.

Bionics: the act of using biological systems or organically occurring processes for the development and design of new robots. 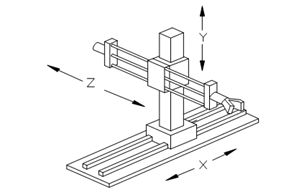 function of a cartesian robotic art, courtesy of toshiba.com

Central processing unit: functionally, the robot’s ‘brain’. It is the main circuit board and process pre-programmed and command inputs.

Cloud robotics: any robot that derives a functional capacity from the cloud.

Controller System: a computer of some type that stores data, executes programs, and directs the operations of the robot.

Cyborg: shorthand for ‘cybernetic organism’, it is any being that possesses both biological and artificial parts.

Downtime: any period of time when a robot is not functioning. This is usually used to refer to operational malfunction or error.

End effector: a general term for the tool specifically designed to allow a robot to execute a specific task, such as a gripper or welding gun. 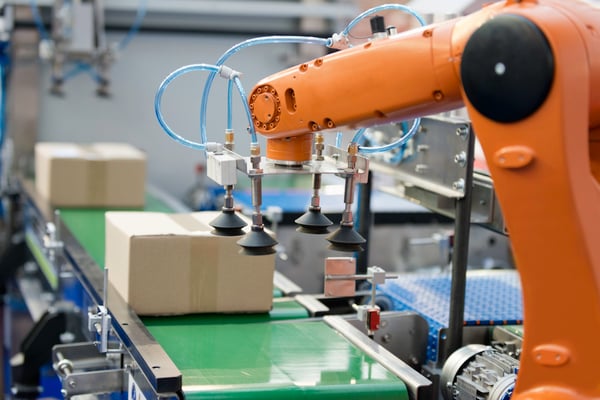 An example of an end-effector on an industrial robot (source: robotics.org)

Feedback sensor: the mechanism through which environmental data is fed back to the central processing unit, which uses it to adjust the robot’s motions. 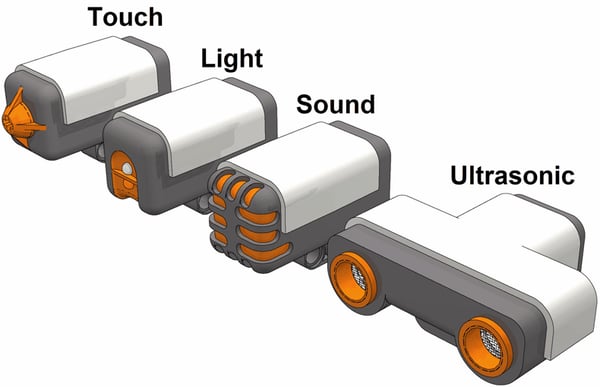 Force limiting: a safety feature that programs a robot to move at a slow, safe speed to allow for humans to work around it without barriers or shields.

Force Sensor: a device that monitors the force exerted by a robot’s primary manipulator, usually as a safety measure for humans and to monitor strain on the device.

Gantry: a hoisting mechanism for a robot that is fixed to a platform or track.

Gynoid: similar to an android, a gynoid is meant to invoke the female body.

Example of a feminized robot from the video game Starcraft II

Haptic: technology that uses the sense of touch in a robot manipulator to adjust the machine’s movements.

Harness: bundled wires that deliver power and data to a part of the robot.

Hexapod: a six-legged robot that takes inspiration from organic insects. 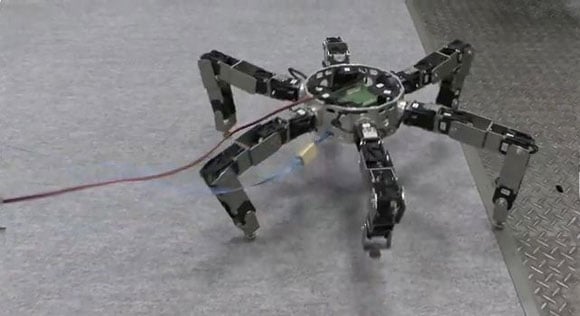 Humanoid: any robot meant to resemble a human and execute traditionally human-exclusive activities.

Hydraulics: a method for generating force through liquid under pressure.

Industrial robot: a manipulator designed to execute specialized commands in order to fill a segment of the industrial chain of fabrication. For example, an industrial robot might be programmed to weld car frames together.

Input device: any device that allow for humans to interface with a robot. Usually, this is for the purposes of programming future actions or direct control over immediate locomotion.

Intelligent robot: a robot that can adapt its function based on sensory data without direct human intervention. Usually meant to refer to the fusion of robotics and some form of artificial intelligence.

Jacobian matrix: a set of algorithms that are used to help position a robot.

Laser: a beam of narrow and focused light that is often used as a non-contact sensors for robots and can be used for anything from distance finding to welding.

Nanobot: any autonomous device that is constructed of molecular components and operating at the nanoscale (one billionth of a meter)

Payload: the payload refers to the weight that a particular robot can carry or lift. This will affect the size and complexity of deployment for a given machine.

Pinch Points: any exposed joints that could catch human appendages or clothing.

Powered Exoskeleton: a wearable machine that increases the strength and endurance of the human frame.

Robot: a device that can execute a task independent of direct human control or activity.

Sensor: various instruments that robots can use to gather forms of environmental data that allows the machine to adjust its own position and tasks based on this stimuli.

Singularity: a configuration of a robot arm where two joints become aligned along a common axis.

Uptime: the period of time wherein a robot is operating as intended.

The path to knowledge

Now that you understand these commonly searched for robotics terms, you should know everything you need to in order to explore the latest developments in robotics and AI! While you’re at it, take a look at some of the types of robots to get a good sense for what people are talking about in the field today.

Interested in learning more about robotics? Discover how Isaac Asimov’s three laws of robotics has been used for decades to program morality.