With the recent rise in inflationary pressures, and the consumer price index numbers being reported for October tomorrow Federal Reserve members have differences in regards to interest rate hikes next year.

In the dovish camp is Federal Reserve Chairman Jerome Powell, and Federal Reserve Vice Chairman Richard Clarida who both spoke on Monday repeating that lift-off or the onset of interest rate normalization will not commence until 2023, or the fourth quarter of 2022. In the hawkish camp, the St. Louis Federal Reserve President James Bullard spoke to FOX Business yesterday in which he said that he expects that the central bank most likely will have two rate hikes penciled in for 2022. 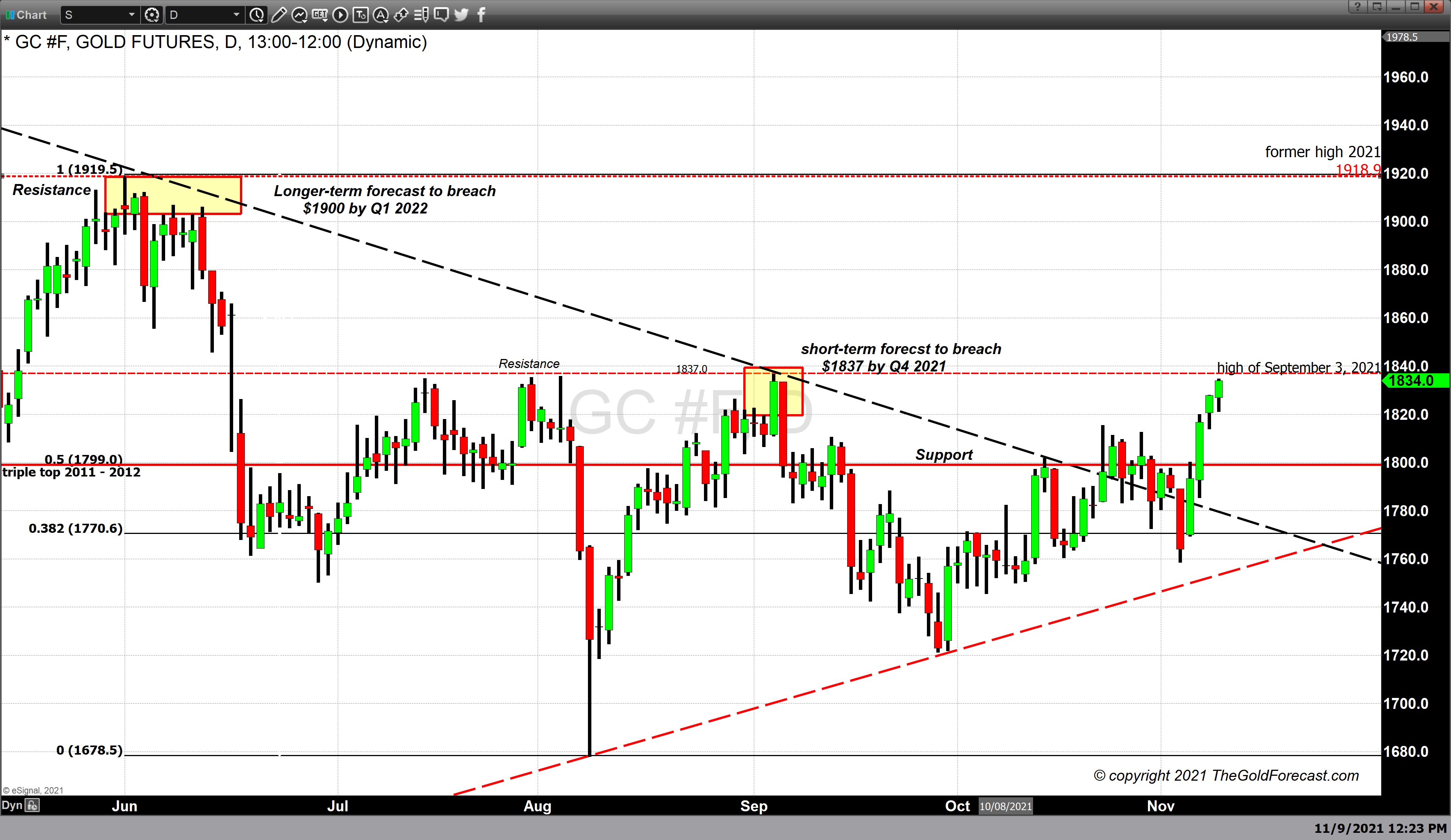 Vice-Chairman Clarida’s comments were viewed slightly more hawkish than Chairman Powell’s saying that he might be open to raising rates sooner than planned because of the spike in inflation.

The statements come at a critical time when the October CPI (Consumer Price Index) for October will be released tomorrow at 8:30 AM EST. The last numbers reported by the government were for September which showed an increase of 0.4%, a 0.1% downtick from the year over year number reported in August. This took inflationary pressures from 5.4% to 5.3%. However, even with the fractional downtick inflationary pressures are still at their highest levels since 2008. Currently, economists are forecasting an increase in the October CPI numbers by 0.6%, which is 0.2% above the CPI increases for September which came in at 0.4%.

During this past year, the PCE (Personal Consumption Expenditures) price index has more than doubled the Federal Reserve’s target of 2% with the most recent numbers coming in with the inflationary level at 4.4% when compared to the year over year numbers. The PCE inflationary method is preferred to be used by Federal Reserve members to measure inflation.

Currently, the labor market in the United States continues to be tight with employers seeking to hire millions of individuals. Disruptions in the global supply chains remain high with hundreds of cargo vessels unable to dock to unload their cargo at major ports throughout the United States, and they continued disruption of micro-chip production. These factors could easily result in a higher percentage increase in the CPI forecast of +0.6% which are currently 0.2% above last month’s inflationary rise of 0.4%. The Federal Reserve will be hard-pressed to maintain its dovish stance in regards to keeping the current fed funds rate between zero and a ¼%.

A combination of rising inflationary pressures and central banks globally indicates that they will keep interest rates at their current accommodative low level in the near term and focus upon maximum employment and a strong GDP. The GDP numbers for the third quarter of 2021 came in at a dismal 2%, and considering that the GDP for the second quarter of 2021 came in at a robust 6.7%, if the GDP for the fourth quarter 2021 does not show robust gains from the third quarter the Federal Reserve will be backed further into a corner in regards to raising rates to help combat higher inflationary pressures.

However, TD Securities analysts put it is simply in a note to their clients which included the following statement; “Gold prices are on the cusp of a breakout. Considering the extremely poor sentiment in precious metals across the last few months, the bar is low for prices to slice through trendline resistance.”

Our daily subscribers to our service have seen me use the same forecast for the last two months which is the chart contained in this article. We have been forecasting that gold would challenge and breach $1837 by the end of 2021. We have also been forecasting that gold would challenge $1900 per ounce in gold by end of the first quarter of 2022. Although when I first put forth our short-term and longer-term forecast it seemed as though those numbers were out of reach. Considering that gold today has risen for the fourth consecutive day and as of 5:55 PM EST is fixed at $1833.80, a net gain of $5.80 and traded to a high today of $1834.80, the forecast seems more realistic than 2 months ago.

Our most current forecast is based on a combination of fundamental factors including extreme upticks in inflationary pressures, as well as technical areas that have served as tops in the market at both $1837 on September 3, and $1920 which was a top that occurred in June of this year.

For those who would like more information, simply use this link.

Wishing you, as always, good trading and good health,