Morrisville, N.C. — A sloppy cleaning crew was the cause of an hours-long power outage Friday at Raleigh-Durham International Airport that caused dozens of flight delays and cancellations and left stranded passengers angry and frustrated.

The outage, which affected only Terminal 2, was reported shortly after 4 a.m., and power wasn’t fully restored until 11:30 a.m.

An RDU spokeswoman said water spilled by a cleaning crew seeped through a floor and onto an electrical box, tripping the system for Concourse C.

Officials had to wait for a specialized contractor to repair the damage and restore power, leaving hundreds of passengers waiting for hours inside Terminal 2. That terminal serves all airlines except Southwest.

There was enough power in Terminal 2 to keep the lights on, but the outage affected numerous other systems essential for operations, from ticketing to security, leaving airport staff to conduct many operations manually.

By 7 a.m., contractors were at the airport working on repairs, and systems started coming back online within an hour.

Some travelers waiting outside the terminal in the drop-off area at 7 a.m. told WRAL News that their flights were supposed to be leaving at that moment.

Some airplanes in flight at the time of the outage had to be diverted to Charlotte Douglas International Airport. Other flights that hadn’t left yet were canceled.

The RDU spokeswoman said it was “unavoidable that flights will be delayed or canceled today.” 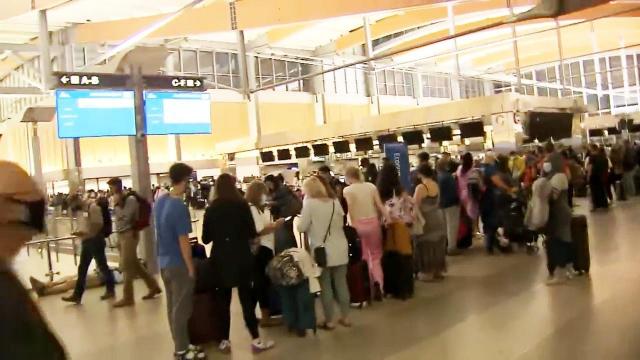 A woman whose flight was originally scheduled for 7 a.m. didn’t know what to think.

Another passenger said, “I’ve never seen Raleigh like this.”

Katrina Machicote said she would have to drive to Charlotte to catch another flight so she could make it to a family funeral in Atlanta.

“I am just very upset,” Machicote said. “Now I have to drive, like, 2½ hours, and I don’t know North Carolina like that.”

The airport encouraged passengers, especially those with morning trips, to check their flight status before arriving at the airport.