FTX Trading Ltd. — the firm behind the US brand that is now ubiquitous across sport centers in the US— announced on Monday its most recent fundraise: a $400 million Series C that values the crypto exchange-operator at $32 billion.

“There’s a big difference between public and private markets,” noted Bankman-Fried in a phone interview with The Block, referring to the firm’s luck in raising capital relative to the more bearish environment for liquid tokens. The latter has come crashing to earth since the start of the year. Meanwhile, FTX and its crypto peers — including the likes of MoonPay, TaxBit, and Gemini — have easily secured cash in the private market in recent months.

Participants in FTX’s round included SoftBank, Paradigm, Tiger Global, and Ontario Teachers’ Pension Plan Board. These investors simultaneously joined the cap table of FTX.US as part of the deal, according to a press release.

FTX’s US business has captured the attention of financial press as it grew its user base to 1 million and hinted at ambitions to go after household names like Robinhood with its own stock trading feature. Its marketing budget has likely played a roll in that success. FTX.US owns the naming rights to the Miami Heat stadium and it is the official crypto exchange of Major League Baseball. It also counts football legend Tom Brady as a partner.

Looking to the future of the international business, Bankman-Fried outlined the ways in which the firm will compete head-to-head with its off-shore rivals. While FTX commands a sizable portion of market-share in bitcoin futures trading and has grown its total user-base by 60% since OctoberFTX, it still lags behind Binance, OKEx, and Bybit in terms of volumes, according to data compiled by The Block. 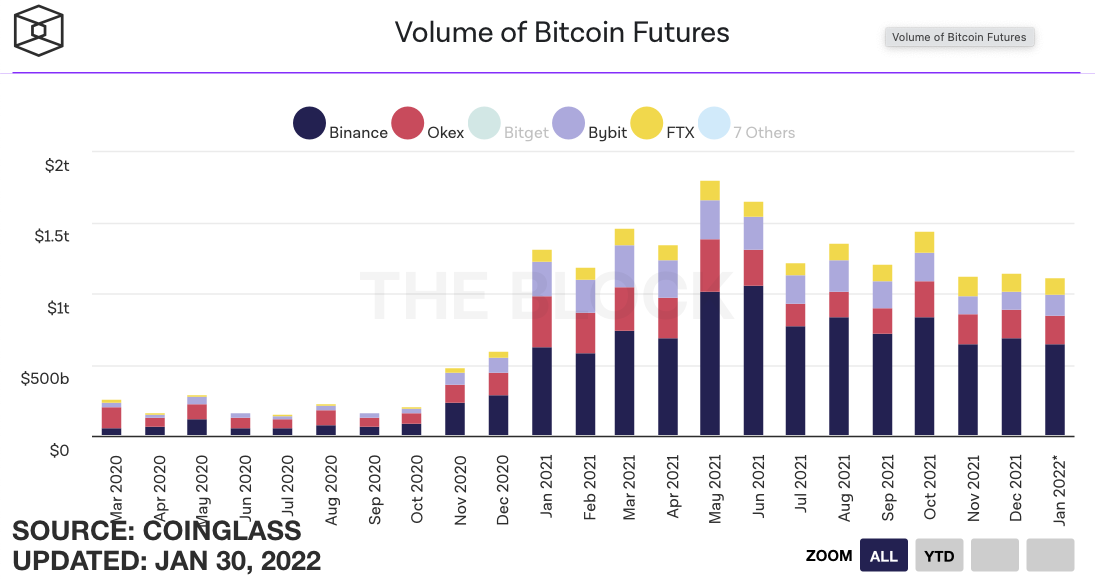 Bankman-Fried said that FTX has been expanding the capacity of its exchange’s matching engine, whilst building out its fiat on-ramps to compete with international exchange venues. It also plans to announce a batch of new licenses to operate more globally in the coming months.

As for the firm’s valuation — which makes it more valuable than more traditional finance companies like Deutsche Bank and Nasdaq — Bankman-Fried said that it is tied to both its ambitions to take market-share within crypto while also expanding the breadth of its product suite.

Ultimately, the executive said that the firm could be at the forefront of assets beyond its bread and butter futures. It has already expanded in NFTs, a red-hot asset class that’s drawn attention from the art world and gaming developers. In the future, FTX could offer 401(k)-like products and other consumer financial products, offering a one-stop shop for its users.

“We see ourselves as the backbone of all assets,” Bankman-Fried said. “Become the one stop, mobile, wallet system.”

© 2022 The Block Crypto, Inc. All Rights Reserved. This article is provided for informational purposes only. It is not offered or intended to be used as legal, tax, investment, financial, or other advice.